I used to go caving nearly every weekend. I have since stopped, because I prefer to spend my weekends warm and dry, but I do miss the beauty and wonder of caves.

Caves are a beautiful “inner” geological world that may as well be out of this world, they are so foreign and unusual. Caves are one of the last unexplored territories on earth. There are very few places with as much unseen territory as caves (the oceans are another example). Because they can be difficult to get to, caves often remain unspoiled by trampling feet and human development. There are many detailed mineral formations and beautiful objects in caves, and they also provide valuable scientific research.

Soldier’s Cave is a limestone cave in California with many intricate features, including cave bacon and helictite. You can see bigger photos here.

Helictite is is a type of speleothem found in limestone caves. Helictite is formed when water and minerals are extruded from the wall over a very long period of time. The results are the beautiful, spindly, almost-transparent formation like the one shown below. 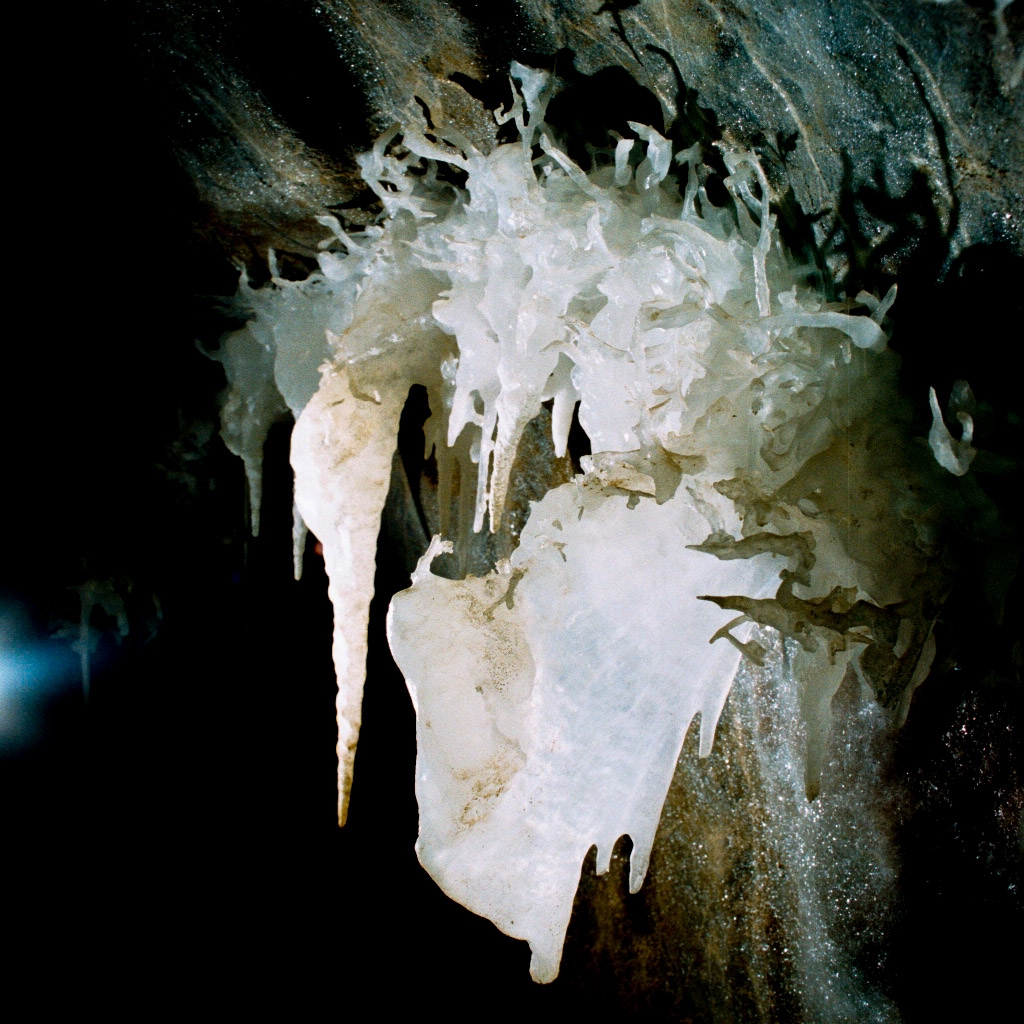 The rock formation below is called cave bacon. Cave bacon is formed in limestone-based caves when a thin stream of water dribbles down the edge and slowly leaves deposits over a very long time. In the end you get thin ribbony formations of minerals. These formations are also called “draperies” because they look a lot like fabric. They have to be lit from behind in order to show the stripes so vividly. 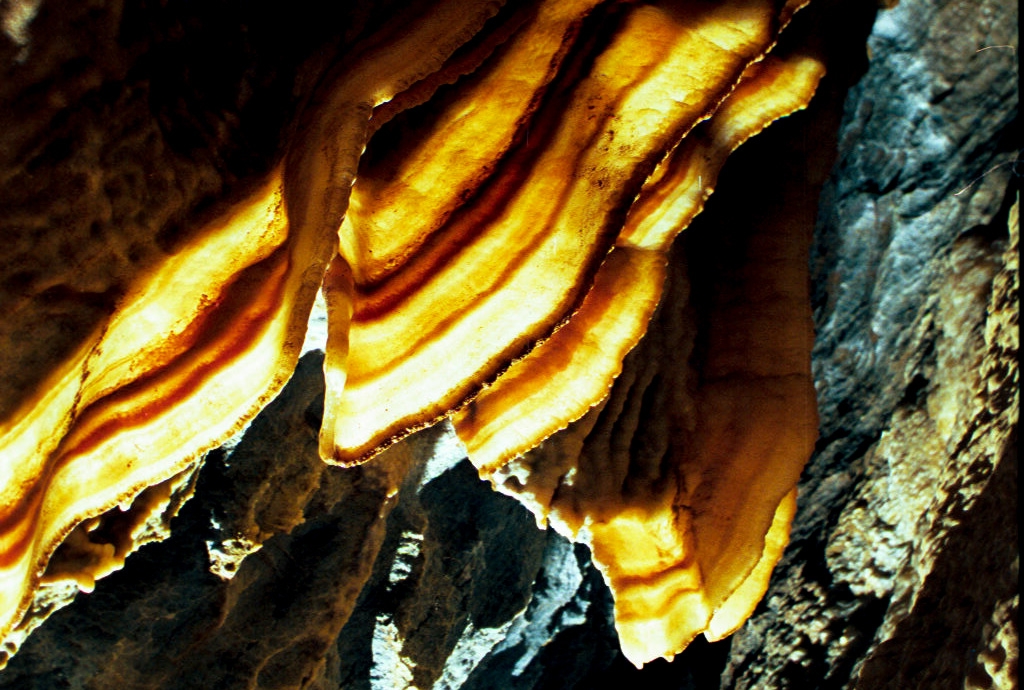 Posted in response to the photo challenge Out of This World and the daily prompt Fabric.

This is a cave in upper state New York that I used to visit often. Clarksville is a fun, muddy, cold, wet cave. There are narrower tunnels in Clarksville than the one shown below, but this photo captures the cave best.

Caving used to be my life. Every weekend I would haul ass to either in upper state New York (when I was in Boston the first time many years ago) or to Sierra Nevada (when I lived in California more recently). I was a weekend warrior. I was OK with being cold, wet, dirty, and uncomfortable, in pursuit of an outdoor experience.

I stopped caving because I now prefer to stay dry and warm. 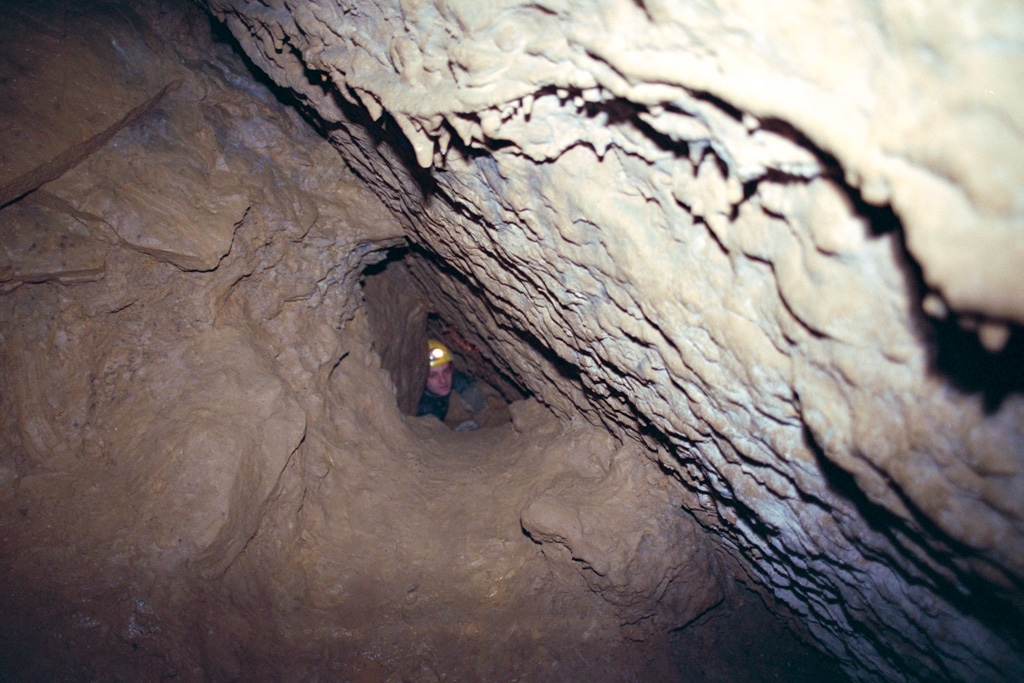 This post is in response to the weekly photo challenge Narrow

This is a picture of “cave bacon” from Soldier’s Cave in King’s Canyon National Park. There is a light shining through the thin rock. Note the little drop of water at the bottom of the blade! Cave bacon is formed when a thin stream of water dribbles down the edge and slowly leaves deposits over a very long time. In the end you get thin ribbon-like blade formations of minerals. This happens in limestone caves. See caves and mountain photos for more like this.

I spent many years exploring the caves of King’s Canyon and Sequoia National Park, in California. 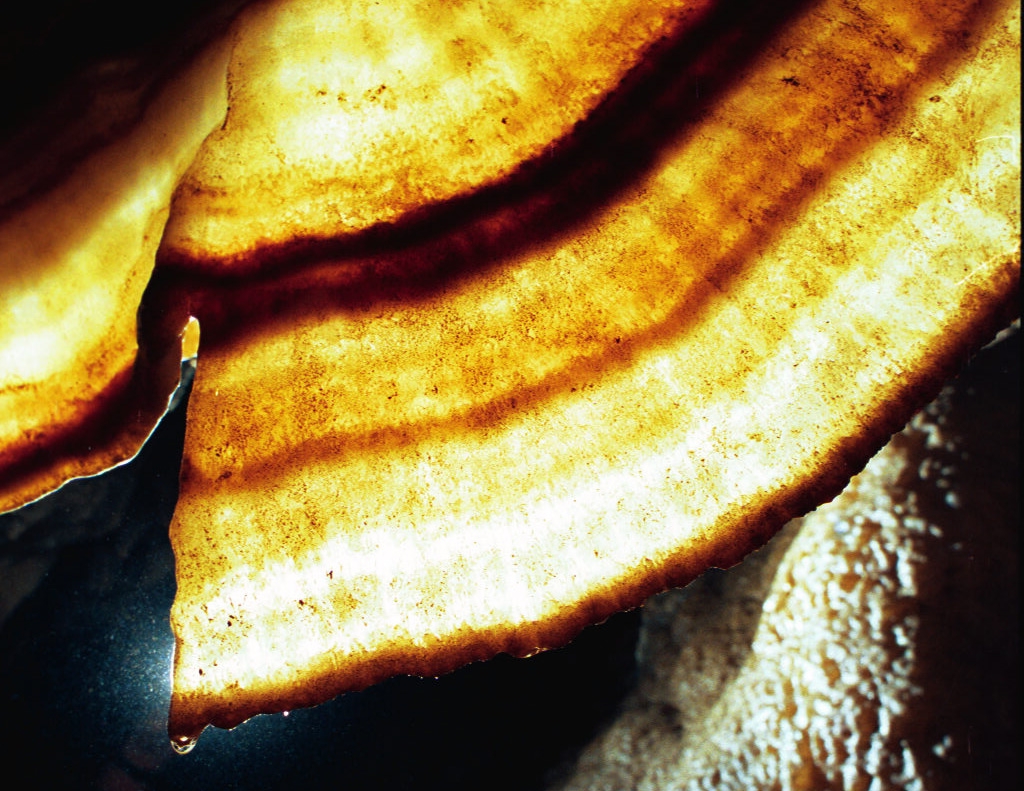 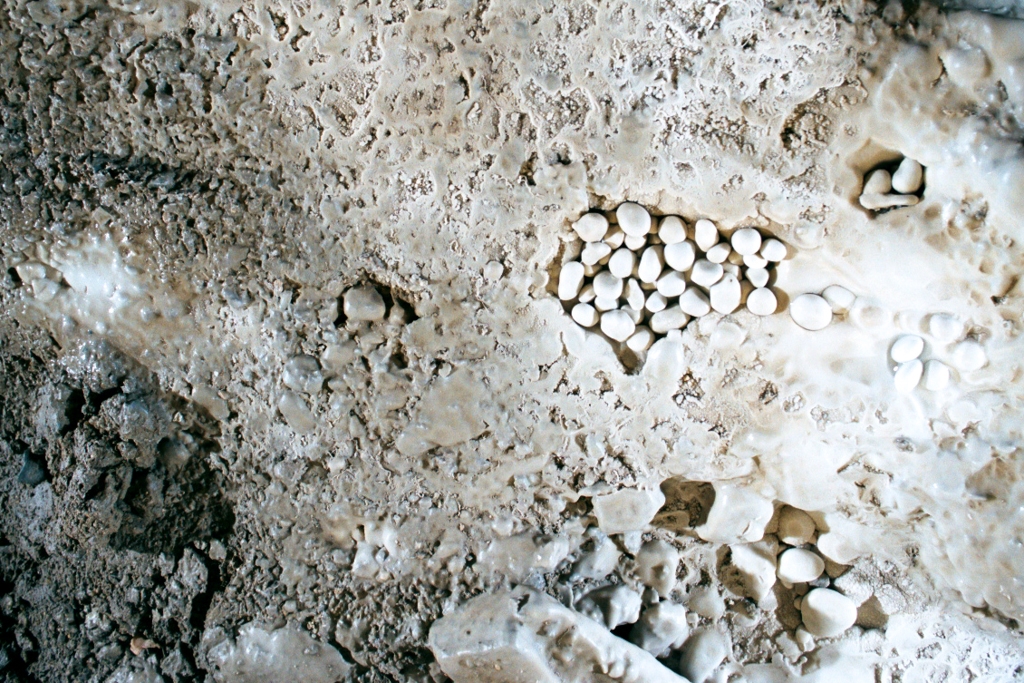 Check out those pearls! You can see them for yourself. One of the things you need to add to your travel bucket list is Crystal Cave in Sequoia National Park, California.  It’s an easy cave with a tour that runs in the spring, summer and fall. The park itself is gorgeous too. I spent many camping trips up there! Here is me posing in my spiffy red cave suit in front of a waterfall: 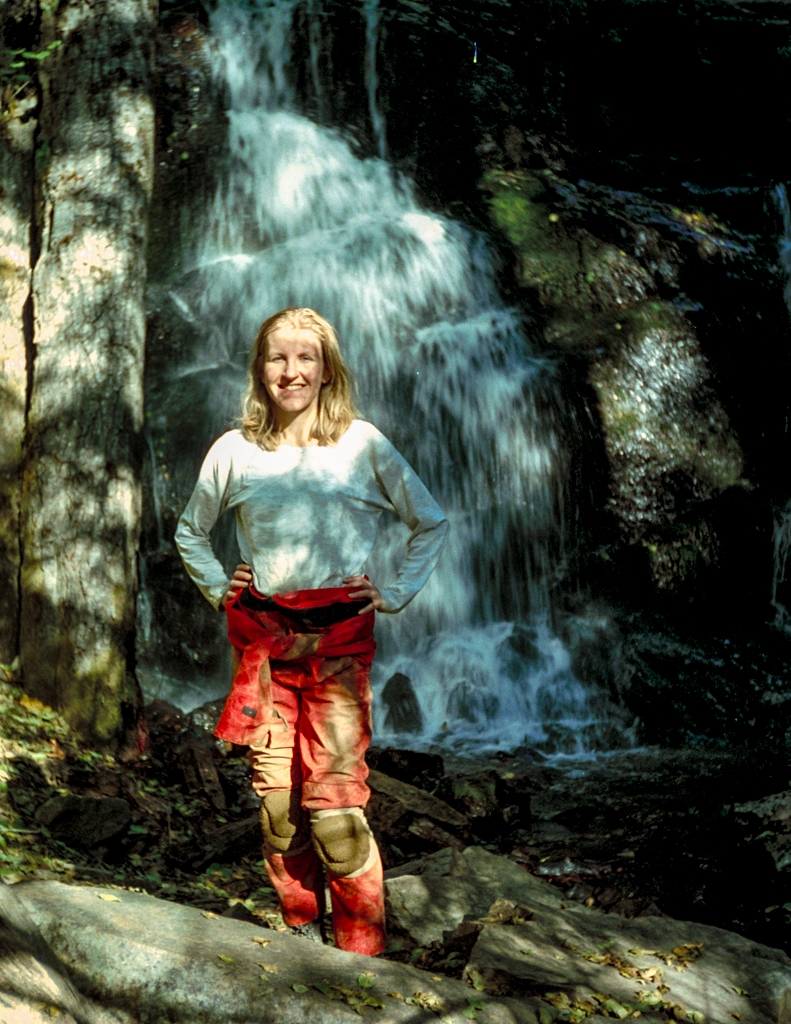 I spent many years caving and camping in this part of the country. California is rich with caves and forest. 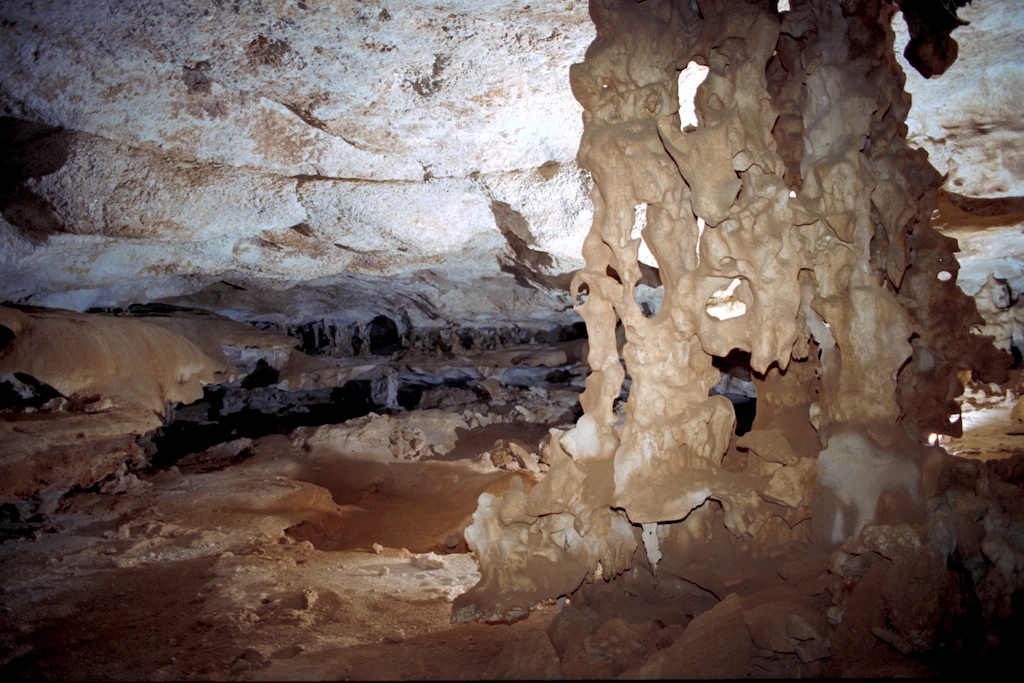 I visited Mona Island, Puerto Rico on a caving expedition a while back. There were a series of caves overlooking the ocean. We camped on the beach for two weeks! The weather was amazing. I snorkeled in the ocean, explored the caves, and hiked.

Like Loading...
July 17, 2007March 12, 2018 ~ Kristen Ankiewicz ~ Leave a comment
Moaning Caverns is a fun commercial cave in California known for its long winding staircase. This spiral staircase has something like 162 steps, and goes straight to the bottom of the cave. There is artificial light in this tourist cave, which is near Angel’s Camp (rte 49) off of Parrot’s Ferry Road. There are signs everywhere! They offer a rappel for a bit more money.