Skip to content
March 20, 2016March 12, 2018 ~ Kristen Ankiewicz ~ Leave a comment
Badlands National Park, South Dakota
A bison is a two thousand pound behemoth that is impossible to miss if you visit the right park. That park is Badlands National Park, South Dakota. Heres the plan: Park your car. Stay in your car. Wait in the car with your camera. The bison will come to you. Don’t get out of your car. Take a picture. Carry on with your life.Here’s the whole sequence as it happened to me. A swarm in the distance looked like dots on the horizon.

It took me a while to register them as bison. The swarm came closer, and the individual animals appeared larger.

It was clear they were coming straight for me. I felt a certain sense of dread. I locked my car doors and took pictures. Bison moving inexorably closer to my location.

The bison were heading right towards me now! They were all around me! They were relentless! They came from all angles! What would I do? Well, keep the car door locked. I didn’t think bison would knock my car over. Where was this guy planning to go?

One of the bison stood right in front of me and watched me. Spooky! Is he winking at me? DID THAT BEHEMOTH WINK AT ME? I am not your type, bison guy. You need to find yourself a lady bison. Gross.

At long last! The beastly creatures sauntered past! I was safe! The swarm moved past my car. I live to tell the story!

This concludes the beast-swarm portion of my Badlands National Park adventure. Badlands is a beautiful park, and it is very easy to see wildlife. Also, in the summertime there werent many visitors.However I recommend visiting in July so as to avoid the cluster of traffic surrounding Sturgis. The Sturgis Motorcycle Rally is held in South Dakota in early August. Its lovely to meet so many bikers on the road and in the diners, but it does create havoc for traffic and renting motel rooms. I had to avoid South Dakota completely in order to find a room at a reasonable price or even any room at all. Many motels and hotels were booked completely near Badlands because of the motorcycle rally. Next time I will travel this part of the country in July or September.

Posted in response to Variations on a Theme

When you get a chance, you need to see a moose.

I was seriously impressed the first time I saw a live moose. They are huge creatures averaging 900 pounds, with spindly legs and big old pendulous dewlaps. The bulls antlers are spectacular, though unwieldy-looking. I don’t know how they balance such a structure on their heads, but moose seem to do all right.

Moose were on my list of animals I really wanted to see during my cross-country trip from San Francisco to Boston. I had seen many other large animals in and around the national parks: bison; big-horned sheep; elk; coyote; bear. By the end of my road trip moose were still elusive.

Moose are more skittish than some of the other large animals. Bison will have no problem scuttling right up to your car. Big-horned sheep will chew on grass right next to you as if you are a visiting cousin. Park regulations suggest that you back off, but in my experience the animal will make that your problem.

Moose on the other hand might not be so easy to spot. The easiest way to see moose is to head north to our friendly neighbor nation Canada, where the moose are bold and plentiful. However this book is about things to do in the U.S., so Ill share my advice for seeing good ol red-blooded American moose.

There are moose in the vicinity of Grand Teton National Park. However, the pressures of tourism on the park mean they more likely to spend time outside the park. I looked, so I can tell you, they are hard to find in the park.

I spent at least two hours looking for wild animals in this collection of bushes: 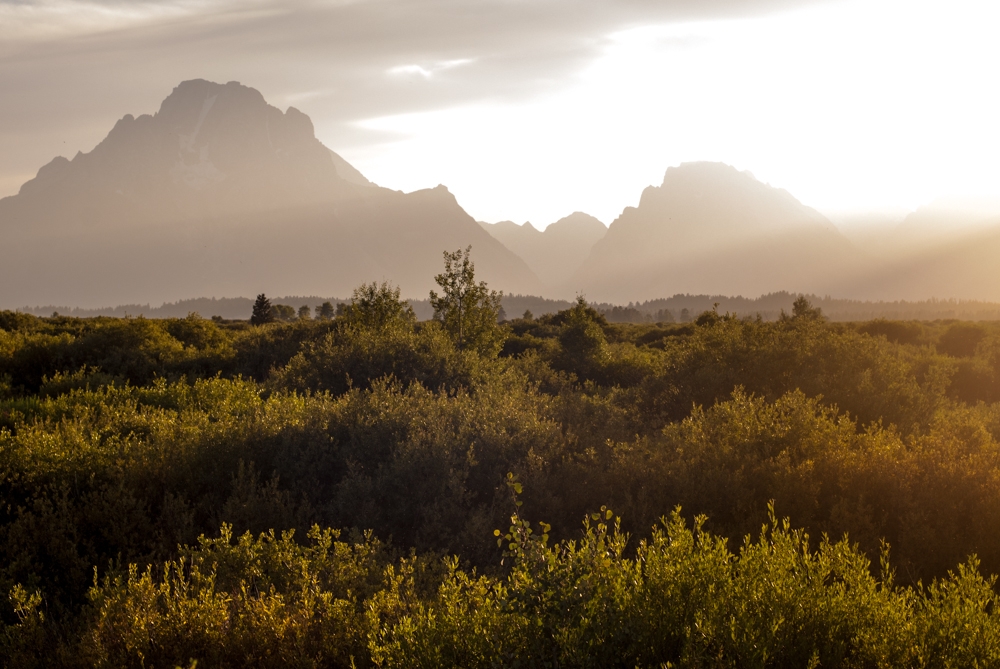 After just about giving up, I asked a naturalist at the park where to find the moose. She told me that the moose tended to gather at a spot southeast of the park, across from the river. They eventually come out to drink. I took this advice very seriously, and went to this spot to stake out the moose. I spent three long days waiting for the beasts to come out in the open.

When I got there a crowd had already gathered. L’enfer c’est les autres. I particularly recall one guy who was showing off his giant long lens. It was an impressive lens, definitely the right lens for taking wildlife photos. He wouldnt stop talking about his camera equipment. I dont know the guys real name, but for the purposes of this story his name is Golem. Everybody was impressed with Golems lens. Im sure it was very precious.

Fortunately I had patience on my side. Bugs also worked in my favor. The bugs came out at dusk, driving away the crowd. I went back to my motel at night and came back the next day. Fewer people milled about. Golem didnt last a day.

There was still no sight of the moose, but I persisted. By the third day everyone else was gone. However, there was still no sign of moose. It was getting dark. I was losing hope of getting a picture, but I just wanted to see some moose. Any moose at all would have made me happy.

And then they came! A bunch of moose! Including bulls! The grainy dark photo below is the best photo I could get, but you can see the outline of his antlers. I was ecstatic.

Bull moose outside of Grand Teton.

If you want to get a good photo, bring a long or fast lens. Ignore the chatty people, because they will dissipate after a day or two. Be patient and keep a lookout. The moose will eventually come to the water. Bring bug spray. If you still don’t see a moose, leave the park. Also be sure to follow their seasons. The mating season happens in autumn and leads to more bulls out in the open.

I was driving around in Yellowstone when I saw an unpaved road so of course I HAD to take it. An earlier wildfire had burnt down most of the trees and taller vegetation. Lots of wild flowers had grown up over the burnt land. Because it was unpaved, fewer drivers came down this way. I had the place to myself.

I got to go as slow as I wanted and eventually I snuck up on a bear. He was just digging away happily in the dirt, totally ignoring me, presumably looking for bugs to eat. I was kinda hoping he was looking for berries. Someone told me that bears often got drunk on the amount of fermented berries in their bellies.

My second national park on my epic San Francisco to Boston road trip was Glacier National Park. I started on the main road into the park. It was the main road. Full of cars. Nothing remote about it. I was still wearing flats, not boots. I pulled over into a small parking lot to put the boots on. A marked parking lot! Cars all over! Main road! People and stuff!

So there I was next to my car with no shoes on when this guy shows up. He was on the other side of the car at first. You’ll have to imagine that he’s LOOMING next to me (I only started photographing him from the safety of the car). I jumped into the car, shoes in one hand and boots in the other, climbed into the driver’s side, put on some form of shoes (I forget which), and took a bunch of photos. At the time I thought he was a fox because he looked like a small dog.

Later on I showed a native american nature guide my photos. Apparently he is a coyote. Hah hah, double-dumb on you, Kristen.

Never leave the house without your boots on!

To get from San Francisco to Boston, I took a six thousand mile circuitous route through many national parks. I started in mid July 2013 from San Francisco, having sold or given away all my furniture, and rolled into the Boston area during rush hour on August 17. I travelled alone because I like to eat on my own schedule, pee on my own schedule, fill the gas on my own schedule. I don’t like chatter in the car while I’m trying to drive. I’m in the zone when I drive. I concentrate. I hiked alone except when there might be grizzly bears. Maybe I’m a loner? I don’t know but I had a blast. I was never afraid. I took precautions regarding wildlife.

My first destination was Lassen Volcanic National Park in California. It was full of evergreens and redwoods typical of the forest you’d see in California. I took a longish hike in new boots, luxuriating in the hot weather outside of the city.

We visited the ruins on the beach in Tulum. I like ruins, but honestly, I was more interested in taking photos of the iguanas that were all over the place. The iguana shown here made it into this photo quite accidentally. This photo reminds me that the waters of the Mexican Riviera are turquoise and beautiful.